Here is the interview with Heather Edwards I promised in my last post with. Heather is the author of the early reader I found so charming: Sherlock Cat and the Missing Mousie. And here she is with her own cat named Sherlock, who is not the Siamese cat in the story, but who has that crafty detective look, in my opnion. 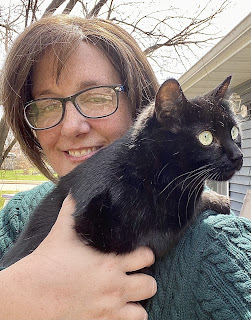 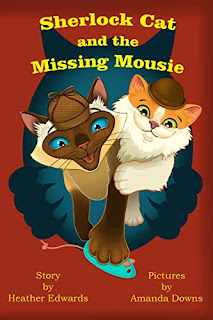 1. The two cats in your book, Fluffy and Spot, have distinct cat personalities: Are you a “cat person” when it comes to pets? You seem to have nailed their traits.

Aw, thanks! I like to think I’m an “equal opportunity” pets person, as I love all animals. But having said that, I have five cats, and only one dog.

2. What inspired you to write this mystery? Did you idly observe a couple of cats and decide to make them sleuth wannabes? Or was it just a case of thinking, “Someone should write a story where a cat wants to be Sherlock . . . what if . . .?

I’ve always enjoyed kids: reading to them, being with them, sharing adventures with them. I’ve tried writing adult novels in the past, but I realized a few years ago that I wanted to write for the people I enjoy most: the kids. And, because I know a lot about Sherlock Holmes, along with its many “inside jokes” among the fandom, I thought it would be fun to write a kids book that would make the adult Sherlockians chuckle as well.

And I think most of us would agree that if Sherlock Holmes was an animal, he’d be a Siamese cat.

3. How long did the story take from start to finish?

I started it a few years ago during “Nanowrimo.”  Then I put it aside; I wasn’t sure I wanted to write books for children. I told myself  I’d get back to it when I was less busy. Of course, for so many of us, the “less busy” days came during the Covid lockdown of 2020. I picked it up again then, and finished it in the early months of 2021.  It's interesting to read of a published book that's the actual result of NaNoWriMo! Well done!

4. Are there other adventures for this duo in the works?

There is! “Sherlock Cat and the Thwarted Thespian” is the working title for the second one. In that book, one of the boys (sorry, I can’t tell you which one!) will accidentally become part of a community theatre production!

5. What is your usual writing process?

I know that a lot of writers need absolute quiet when they write. Weirdly, having other people near me (but not necessarily talking to me) makes me more productive. Working in coffee shops or restaurants is the perfect scenario for me; I like the background noise, and the energy of the people around me.

6. You did a good job of blending cat traits with personality traits of Holmes and Watson. Was that difficult to do?

Sometimes it was tricky! Often I had to remind myself, “cats don’t have opposable thumbs” or “cats don’t really know how to giggle.” At times I pushed that boundary a little, but I think the readers will forgive me.

7. Are you a Sherlock Holmes fan?

I am! I know that most people of …*ahem*… a certain age were introduced to Holmes through the work of the amazing Jeremy Brett. But I was late to the party, apparently, because Benedict Cumberbatch was my first “Sherlock.”  I’ve read the original books and many pastiches, and have watched many Holmes screen adaptations as well.

8. The illustrations for this book are just marvelous. Did you know Amanda Downs before the book came out? Or was this a case of the publisher connecting you?

I love telling this story! Amanda and I are both members of our local Sherlock Holmes society, the Norwegian Explorers of Minnesota. Before this, we had met a few times through the society, and I had been a longtime fan of her art. When I had originally started the book a few years ago, I had asked Amanda if she would want to illustrate it. She wasn’t interested at that time.

When my manuscript was complete, I asked Amanda if she’d read it over, just to make sure it sounded all right. She agreed and a few days later, she sent me this incredible sketch of Holmes and Watson as cats. I couldn’t believe it! It was absolutely how I’d envisioned them!

After my manuscript was accepted by MX Publishing, my publisher asked if I knew someone who might be willing to illustrate the book. This time, Amanda agreed, even though it meant she’d have to crank out all these illustrations in less than six months (while juggling her full-time job and a young family as well).  But she did it, and I will be forever grateful to her.

We got together a couple of months ago to sign some Kickstarter copies of our book, and it struck me that we hadn’t actually seen each other for several years, and that we had gone from casual acquaintances to partners during that time.

9. Have you always wanted to write children’s books?

My mom- who is 80 now- has literally been telling me to write children’s books for 30 years, but I never seriously considered doing it until the pandemic hit in 2020. When we were locked down in our homes, I started reading children’s books aloud and live-streaming the readings through Facebook, and I was surprised at how many kids would tune in every night to listen. I was so inspired by the authors I was reading (especially Barbara Park, who wrote the Junie B. Jones series), and I realized I would love for children to be reading my book as well. So I dusted off the Sherlock Cat story I’d started a few years before, and finally finished it.

11. Any advice for unpublished writers?

“… Write like you’re running out of time.” I know this is a well-known line from Lin Manuel Miranda’s “Hamilton,” but when I first saw this production, that lyric really hit home for me. We aren’t given an infinite amount of time on this earth. If you want to write, then do it right now.

Great advice for any writer or artist, for sure. Thank you Heather, for taking time for this interview. Best of luck with the continued success of this book and I'll look forward to the next!

(For those who wish to order the book click HERE)

Readers, is there any activity you can apply that advice to? ( "……. like you're running out of time.)

Are you a pet person? If so, cat? Dog? Something more unusual? Do you take part in NaNoWriMo?

Posted by Elizabeth Varadan, Author at 8:33 AM

As a fellow Cat Lady, I appreciate this post and the feline detectives it spotlights ;)

What a delightful interview! And I'm impressed this started from NanNoWriMo. I've wanted to do this in the past and it's always November which is my worst month in the calendar year after December. I wish it was in March! (And you probably know from my blog -- I'm a Cat Woman!)

Fun interview. The book sounds like one Holmes fans and kids will be delighted to read. Thanks for the post.

Mirka, somehow I just knew you were a Cat Lady. I like the idea of feline detectives, too. :-)

Hi, Jeanie, I'm impressed by its NanNoWriMo origins, too. I tried NaNo once and just bogged down. For some reason, instead of motivating me, it blocked me. Go figure.

Hi, Rosi. Well I think it's a delightful introduction for young people to the world of Sherlock Holmes.

I thoroughly enjoyed this interview. Your questions were well thought out and it gave Heather the ability to answer in her own voice. Thanks for introducing me to her, too, Elizabeth.

Hi, Elizabeth (and Bleubeard),
I really was taken by her voice, both in the book and in the interview. There's such a nice tone to it, isn't there. Meanwhile, I'm glad you liked the interview. If you know any" little ones" it might be a nice discovery for them. (Well, it was for me, too, because I did a lot of chuckling throughout the book.) 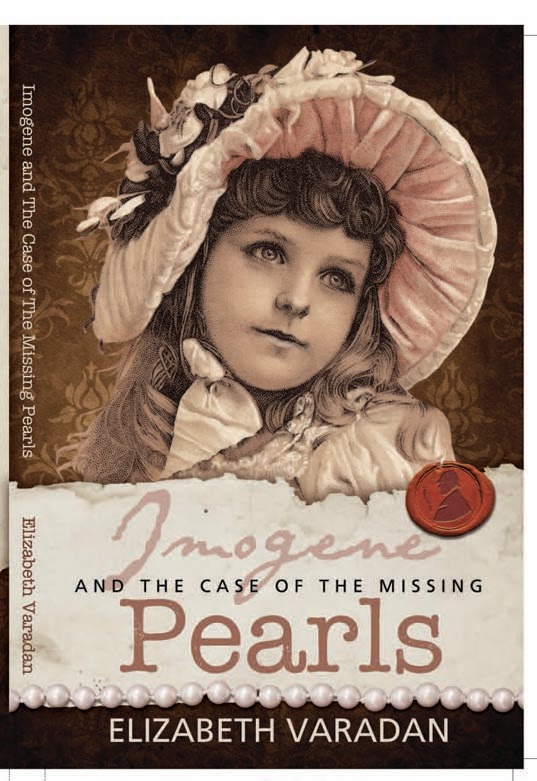